Back in August 2018, Lesley Stirrat came up with the idea of designing & producing a tartan in Alan’s name. Lesley & Gillian Watkins met with Eileen in Ryries a few weeks later to run the idea past her. She was thrilled & so the project began.

There followed many discussions around the colours & the name of the tartan. The colours chosen were purple for the heather, green for the Ochil Hills, dark blue symbolising the Bannock burn & pink a favourite of Eileen & Lesley. The tartan was to be called The Official Alan Longmuir Proud Son of Edinburgh tartan. The information was provided to the design team at Marton Mills who worked with Lesley to come up with some ideas. 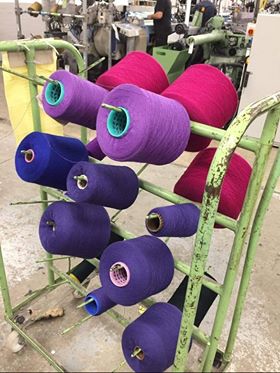 First the registration process began. This is done through the Register of Tartan at Register House in Edinburgh, here is Lesley working with the Registrar of Tartan & her colleague. 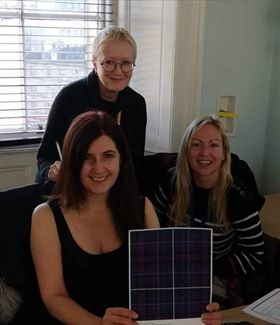 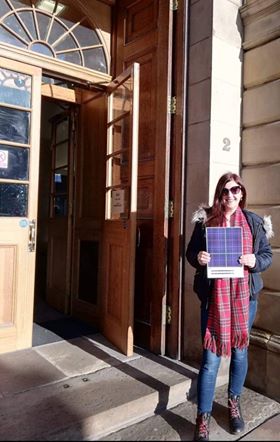 The final version is shown below. 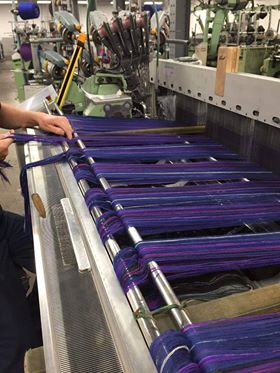 Eileen wanted to launch the tartan at Alan’s book launch in November 2018 for several reasons, obviously it was Alan’s local of many years but also because the Tartan Arms used to be called The Tartan Weavers as Bannockburn is one of the first places in Scotland to produce tartan . In addition, all Alan’s friends & family would be there. So, on 22nd November 2018 the tartan was launched in The Tartan Arms Bannockburn.

The Tartan was very warmly received & the story found it’s way into the Edinburgh Evening News.

Much preparation is now going on behind the scenes to produce firstly, items requested for Alan & Eileen’s family & secondly items for sale in the tartan.

There is not a finite amount of the tartan from one weave so Eileen would like to launch the very first items available for sale at the Proud Son of Edinburgh Remembered event 21st June 2019.

We know many of you are looking forward to being able to own your own piece of Alan’s tartan, these will be all the more special because they are from the very first weave ( batch) . Monies raised will be used to purchase the next weave, of which all will be available to produce a beautiful range of products for general sale. 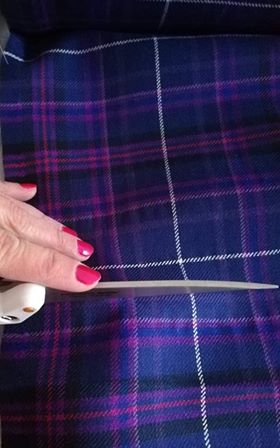